The beautiful landscape of the Canavese and the Biellese areas in the Piedmont region of Italy.
Located at the foot of the mountains and with it’s beautiful Serra Morenica, a morenic woodland hill, it offers a variety of terrain and undulating landscapes including several lakes and medium to small rivers.

These landscapes are a fantastic playground for the lovers of the outdoors and the outdoor activity. To mention but a few of the activities that are popular around this area:
Waterskiing, Wakeboarding, Canoeing, Mountain Biking, Road Cycling, Paragliding and Handgliding, Bungee Jumping, Wild Water Canoeing, Fishing, Hiking, Walking, Nordic Walking.. and many more.
In this video a quick view to give an idea of this beautiful landscape:

Thank you for passing by and for reading this post!
If you have any question or need any more information, don’t hesitate to get in touch, and remember to GET OUT MORE as it’s..

A beautiful hike in the Alpi Biellesi, the alps surrounding the town of Biella in the Piedmont region of Italy.
This is a perfect area for easy to medium hiking tours, with mountain walks ranging from 1.5 hours to 4/5 hours depending on your fitness level, age and skills. There isn’t any danger or cliffs but you can eventually find some bits of via ferrata in the area if you wish to do so.

As usual, thank you fo pasing by and for reading this post and remember to GET OUT MORE as it’s…

Whitewater canoeing is the sport of paddling a canoe on a moving body of water, typically a whitewater river. Whitewater canoeing can range from simple, carefree gently moving water, to demanding, dangerous whitewater. River rapids are graded like ski runs according to the difficulty, danger or severity of the rapid. Whitewater grades (or classes) range from I or 1 (the easiest) to VI or 6 (the most difficult/dangerous). Grade/Class I can be described as slightly moving water with ripples. Grade/Class VI can be described as severe or almost unrunnable whitewater, such as Niagara Falls.

At the request of the Ivrea Canoe and Kayak Club, Hydrostadium accepted an expertise mission in the beginning of 2007. The aim of this expertise was the optimization of the last third of the course with a view to the organization of the World Cup Sprinting in June 2007.

The re-modeling of the end of the course makes it much more attractive. Moreover, the water level is higher and the final threshold with drop safer. ( Source: www.hydrostadium.com 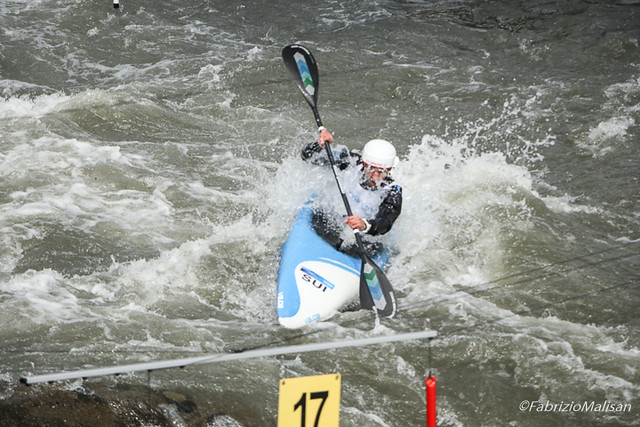 Thank you for passing by and for reading this post and remember to GET OUT MORE as it’s..
FABULOUS OUTDOORS!
©FabrizioMalisanPhotography – Contact: info@FMphotos.co.uk

The Biellese region is a fabulous land for cycling, offering several quiet roads to ride. Cycling is a great way to explore and discover these beautiful landscapes of the northern Piedmont region of Italy.
In this video I’m showing you a great climb, with quite a challenging gradient, reaching about 15%, but very rewarding and panoramic.

The climb begins once passed Biella, a lovely ride up through the Valle Cervo which is a valley that feels like time has stood still. The ride is very pleasant surrounded by very beautiful characteristic houses and picturesque villages along the river. Just before you get to the town of Rosazza, there’s a left turn on a bridge, then left again towards San Giovanni and Galleria di Rosazza, the tunnel that leads to Oropa on the other side of the mountain. However, whilst you are there, I recommend you cycle all the way to the end of the Cervo Valley, to visit Rosazza and Piedicavallo, both really interesting little villages.

It’s always more exciting to cycle up a hill from one side and descend the other side, as it really feels like travelling further.

The Sanctuary of Oropa has hosted a few Giro d’Italia stage finishes. It’s a great road to climb from the town of Biella, winding it’s way up to the Sanctuary.

Check out the STRAVA segment from the full ride:

IF YOU NEED MORE INFORMATION:

Thank you for passing by and for reading this post! You’re welcome to SUBSCRIBE to this blog, to the FABULOUS SPORT OUTDOORS YOUTUBE CHANNEL  and remember to..

Autumn is the season known for it’s fog and mist. However, quite often the thermal wind blows up and down the valleys, clearing up the sky and leaving as to beautiful sunrises and sunsets.

I’ll add to this post some more images, as now as I’m writing is just the beginning of that period of the year, by the alps of Italy.

It is for most people, the best season of the year. Particularly, for those who are in love with nature.

A walk in the woods with your dog in Autumn is a moment of active relaxation, all the colours enhance the beauty of nature.

Thank you for passing by and reading this post!

More images will be added soon, as Autumn has just started as I write and the colours will get better and better.

Very pleased to see the Italian Road Cycling Championships 2017 arriving in my hometown of Ivrea in the province of Turin, Italy. The race started in Asti, went across the Piedmont, through the Canavese area and finished with a 4 laps around Ivrea and up the Serra Morenica hill.

It’s great (for me) to see that this land is becoming more and more considered by the pro riders and the professional cycling event organisers. It offers a variety of terrain perfect for cycling, touring and training, going from undulating landscapes to steeper hills and mountains.

There has been a beautiful stage of the Giro d’Italia finishing by the Sanctuary of Oropa, just above the town of Biella, on the Biellese side of the Serra Morenic Hill. The cherry on the cake has been the presence of most Italian top cyclists, and the victory of Fabio Aru, as most of us spectators were hoping.  Vincenzo Nibali was there too, and many other professional cyclists that we usually see on TV when competing in bigger events.

The National Championships is actually a great opportunity to get close to these pro cyclists, to get an autograph or a selfie, and maybe even a few words as they are much more relaxed than in a Giro d’Italia or Tour de France stage.

It was great to see the smile of joy on Aru’s face, an emotional  moment when, on the podium, he dedicated his victory to Michele Scarponi. It’s very touching to see that the Astana Proteam keep images of Scarponi on the Team Bus and that they keep mentioning him, sharing anecdotes & jokes and the good times spent with the late Michele. He was such a great companion and a big loss for the cycling and non-cycling world.

Coming back to Fabio Aru’s victory, on the last lap Dario Cataldo kept a fast pace at the start of the Serra hill climb, to get Fabio in the best position for his winning attack, and it worked to perfection, as the road got steeper ( gradient over 15% above the town of Chiaverano) Fabio went full gas leaving everyone behind. At the top of the climb there is still a fair bit to cycle back down to Borgofranco and then to Ivrea for the finish, but he managed to get a fantastic solo win….well done Fabio Aru!! It’s going to be a promising and very exciting Tour de France 2017 to watch.

MORE OF MY IMAGES OF THE EVENT ARE or WILL BE UPLOADED on these links to my other photography sites: INSTAGRAM @fabulousport    FLICKR   500px

Thank you for passing by and for reading this post, you’re welcome to Subscribe, Follow on every other social networking platform I’m on.. until next time,

Get Out More as it’s